A Pastoriza has a wide range of services and parties for all its inhabitants and visitors, which include the singular spectacle that reproduces the ancestral struggle of man against horse, and that takes place in the beautiful and wild landscape of the Campo del Oso (or Campodoso), at the foot of the Carracedo hill, a valley shared by the parishes of Bretoña (A Pastoriza) and Santa Maria Mayor (Mondoñedo). The ritual of the “Rapa das Bestas” consists of branding and shaving horses living in the wild, being a tradition of ancient origins that today has become a cultural and tourist festival of great colorfulness and ethnographic value. So, once a year the men of the area lead the wild horses and mares (“bestas”) to a fenced enclosure on the mountain (the “curros”), where the “agarradores” struggle with horses brute force to first reduce them, then cut their manes and red mark. Once the ritual ends, the animals are set free again. The day begins early in the morning with the closure of cattle, followed by shaving of the wild horses, dressage and branding. By noon, after the release of cattle back to the mountain, a picnic takes place including a free tasting of colt meat. The day is completed in the afternoon with equestrian games as dressage and races, musical performances, a raffle with a pony as prize and  an awards ceremony. Since 1996, a festival in honor of the god Lug has been uninterruptedly held in Bretoña, a landmark event amongst Celtic themed celebrations in Galicia, where the main objective is to revive the magic of Celtic culture one day. The event is held at the Coto de la Auruxeira, in a thick forest beside the Miñotelo river located near the village of Bretoña

Geolocations of Services in A Pastoriza 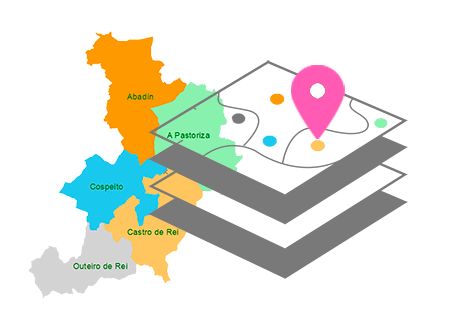