The intense wind harnessing in this small mountain range interposed between the Cantabrian coast and the interior of A Terra Chá betrays the constant presence of wind. Including the “xistra”, the wet and icy wind that sweeps the peaks here, some of them only bare rock.

The northern massif is formed by O Xistral with the highest point in O Cadramón (1,062 m), the mountains of A Toxiza (832 m) and A Carba (908 m). In addition to the wind, this is also the kingdom of fog. These peaks entrap the heavy clouds that every year leave significant amounts of rainfall. Despite the proximity of the sea, winter snowfalls are not rare. The water is deposited on the high plains covering natural pastures and creating extensive deposits of peat. Those are the peatlands, popularly named as barriers, marsh or lake. For example, in places of Barreiras do Lago, Lagoa das Furnas, Tremoal da Charca de Santa Cruz …

The main rivers that have their headwaters in these mountains are the Eume, on the Atlantic side, and Landro, Ouro and Masma, in the Cantabrian. Wild horses are a common image in this mountain.

The complex of bogs and wet heaths have emerged as the largest carbon reservoirs in temperate Europe, therefore forming a key element in the strategy to combat climate change. In the NW of the Iberian Peninsula, the northern mountains of Galicia are the most western part of the Cantabrian Mountains. The core of this complex is made up of the Sierra de O Xistral, whose sommet is shaped by broad expanses of peaty ecosystems. The available multidisciplinary information allows a detailed and accurate knowledge of dynamics, typology and mapping of the peatlands systems. Based on these data, this work evaluates the carbon content stored in different ecosystems, as well as the dynamics of the reservoir during the last ten thousand years. The data obtained shows that the carbon reservoir in the system bogs of O Xistral 106 amounts to 8.6 tons, making the territory studied one of the largest carbon reservoirs OS Europe. The maximum values of sump extension relate to climate optical Holocene (around 5,000 BP), then climate change caused a loss of surface active peatlands. More recently anthropic transformations, have diminished its storage capacity, also converting areas in sink carbon sources 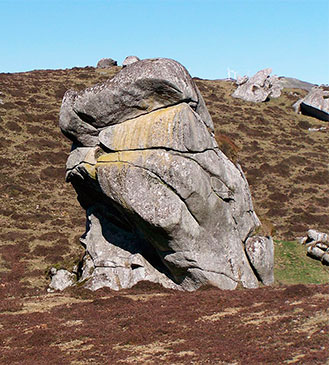