It’s not easy to find the Caldaloba castle. Or what’s left of it. Even the photographer went astray a couple of times. An adventure. And therein also lies its charm (the fortress’). Because you can still organize a family expedition to the heart of Galicia, full of little mysteries, and with the added attraction of zero danger even for the smallest.

The hill in which the 25 meter high tower rises was already used in prehistoric times: it was a castro, neither more nor less, located in what later was called the preserve of Mato, dominating the area between Vilalba and the rivers Támoga and Miño. The four pits remain covered by vegetation, but they are still there. So in the Middle Ages the tower and the walls were built. Of these walls nothing actually remains, but the tower resists: four floors, granite masonry in the corners and very thick slate in the rest, square and with a dome on top. Of the dome, it’s only possible to admire the starts of the arches, topped by corbels.

Marshall Pardo de Cela was around here. His daughter, Constanza de Castro, in 1483 also from here expelled the envoys of the Catholic Monarchs, ultimately responsible for the beheading of his father at the Cathedral of Mondoñedo. Of course the woman was not alone: her husband, Fernán Arias de Saavedra, shared such outrage and resisted the siege. Did they give up? Yes, when the water in the tank was corrupted. The enemy leader, Lopez de Haro, was waiting.

Shortly after, the castle was abandoned and time began its destructive work. When the seventeenth century ended it belonged to the Count of Fuensaldaña, in turn master of the Merindad of Villajuan, ie the preserve of Vilalba. And indeed the fort appears in some documents as “of Villajuan”.

What time could not end was the legend that there is a tunnel to the more or less near namesake pazo. Surely someone will tell the visitors as they approach the neighboring capital of Cospeito, near which a lagoon stretches, recovered by the tenacity of its neighbours. The final part of the walk is worthy of going by foot. 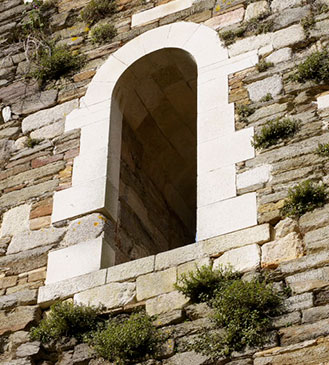